The inception of the idea to do a series on the magic show in a small village Mela (fair) came out of sheer humour. But it turned out to be a different one.


Tapas and I visited the Dhrang village at the pakistan border, about 40 kms from Bhuj. The village is famous for two things.
First its saint, Saint Mekaran Dada who had a dog named motio and a donkey named Lalio with whom he used to wander into the Rann daily with water and food to quench the thirst and show the direction to the lost travellers.
Second, A large fair which is held every year on Magh Vad 14 (February-March).
Coming back to the point of focus. We explored the fair pretty fairly. The most interesting thing that we came across was a local Magic show.
Below is a excerpt from my travel diary about the interesting magic show.
The Aggarwal family’s roots are from Jammu but they are living in Gujarat since many decades. They say that no one believes that they are Aggarwal. “koi manta hi nahi ki Aggarwal ye kar rahe hain”  (nobody believes that Aggarwals are doing this(small job) for living.)
Lucky is the main magician. The family has renamed him as “Jadoogar Abhay Samrat”.
*The show starts*
After the infinitely many pre-recorded announcements of the hefty throbbing name, comes a thin man with long curly hair which are too perfect to look good.Wearing a large overcoat Abhay enters the stage, delivers few dialogues and starts a small magic trick. Runs to the backstage and removes the overcoat and hands it to the fellow family members.
The Sound system is handled by the Chacha (father’s brother) of Lucky who also happens to be a clown for the act further. The Chacha 1 is a Humorous man he jokes and laughs at the same time and all the time. The other Chacha is also a clown in the act, but a more intelligent one.
Lucky’s sister happens to be the helper girl in the show. A tent next to the stage is the living area of the family. The Magic apparatuses are neatly placed at one place in the tent.  Lucky’s grandmother is also humorous, the humour in the family’s  blood is transferred through her. The Grand dad, however is a serious man. Experience is reflected in his eyes but the Burdon of loss, and the falling value of old tricks has made him still. Lucky got the seriousness from him.
The chacha told that the granddad used to own a circus and was a star performer and he could perform some trick involving three swords.  But times changed, he grew old and they had to leave the circus because the children had to be sent to school.
The magic show runs many families Chacha said.
the family also owns a dog who also travels along with them.
Lucky is doing B.Com side by side, education is the only resort to a better future he says. 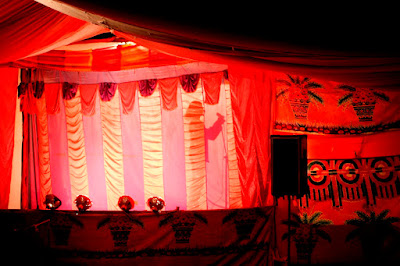 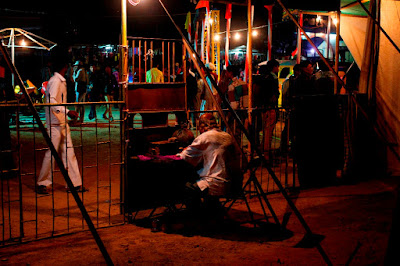 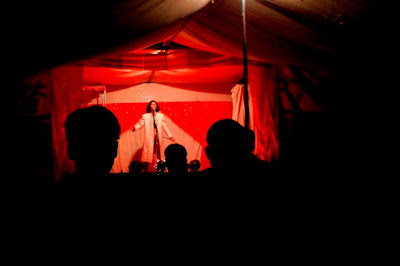 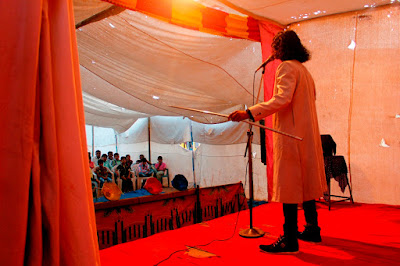 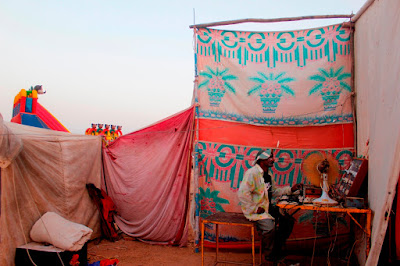 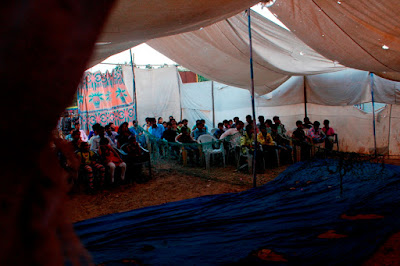 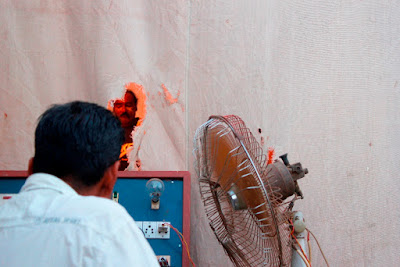 Popular posts from this blog

July 09, 2017
The most versatile piece in a building, [the door] has been a mode of expression [for] ages. The door in apartments and modern societies is just a mode of a transition from outside to inside. In traditional cities and neighborhoods, like that of Kathmandu, it’s much more than that. It’s the place where people spend most of their time. Sitting at the Chaukhat, socializing and chatting. The door is not just a tangible unit, it’s the respect you give to your building. Below are the photos I clicked during my site visits and explorations in and around Kathmandu, Nepal. The collection will keep on updating.  Update: A wonderful poem by my ex-professor, mentor and friend, Saurabh Tewari द्वार नहीं हैं ये बस लकड़ी के। सदियों से चल रही संस्कृति के। बस रंग नहीं हैं, अभिकल्प नहीं हैं, प्रमाण हैं ये नेपाल की हस्ती के।  नेपाल के दरवाज़े देखिए, निपुण प्रभाकर की आँखो से। There is a tradition of offering prayers at the door every morning. The two red dots are the
14 comments
Read more

September 29, 2015
Prologue:  “ I have not slept for more than 6 hours since the time I started my internship. There have been times when I haven't slept at all. Everyday is a beautiful day here. There is no unproductive or bad day at Hunnarshala. I sleep less because I am always so excited and enthusiastic for the next day to come, the next day with challenges, adventure and something new to look forward to. ” I am Nipun, a student of architecture. What you are going to read is the  story  of six months that changed my life. Hunnarshala  is a not for profit company based in Bhuj, Gujarat. It mostly works in the fields of disaster rehabilitation, housing for poor, and social architecture. It is very specific about the use of sustainable and eco-friendly designs and materials in its projects. The involvement of the users and the knowledge of communities is paramount in its designs. I was going to Spain for my internship for six months but my visa got rejected. Around the same time, I got
11 comments
Read more

September 25, 2017
I met three old men for an assignment today. They have a very special skill which has almost died. They say,  that there are only 4 or 5 Paggis are left in  Kachchh  today. Paggis are men who identify the footprints of People and animals and get information about them. They help people, police and even army in investigating the foot traces of terrorists, thieves, lost cattle etc. I went to their village with Naeven Bhai, the driver of Sehjeevan who knew them well. This meeting was one of the best one since a long time. I had only a few hours to cover their story and come out with a photo essay. With a lot of curiosity, I bombarded them with many questions. A crux of what came out is below: They belong to the Sodha community of Sindh, Pakistan. In 1971, during the India Pakistan war, they crossed the border and took refuge in India, in Kachchh. They were eventually given special 'Paggi certificates' by the police and also once invited by the police and the Intellig
1 comment
Read more